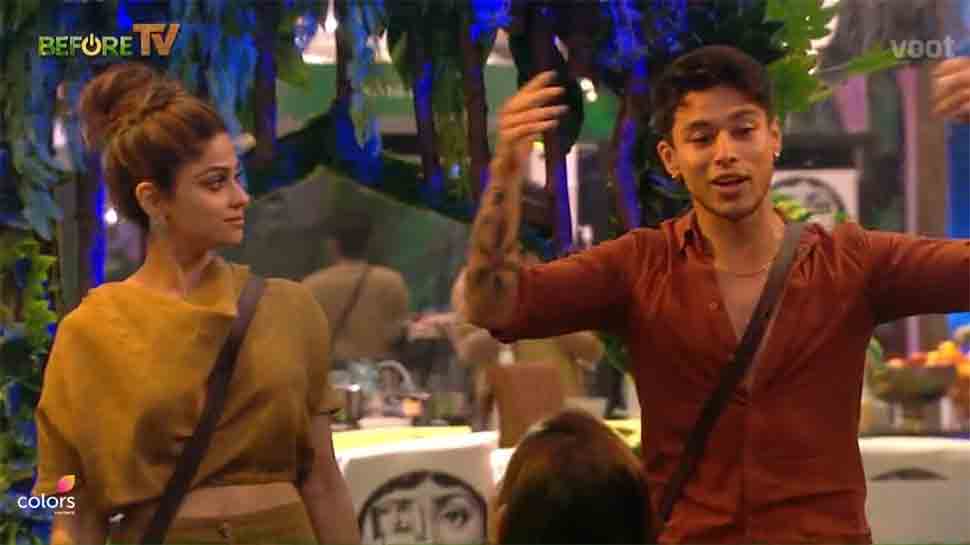 Bigg Boss 15 house on Friday saw another round of madness with ‘junglevaasis’ and ‘mukhya gharwaale’ planning, plotting and playing mind games against each other. Pratik Sehajpal and Nishant Bhat are seen teaming up against Shamita Shetty after what happened a day before. Shamita had handed over a portion of a map to ‘junglevaasis’ after an altercation with Pratik.

Housemates tease Miesha Iyer and Ieshaan Sehgaal for their growing proximity on the show. The chemistry between them appears to be heated as they are seen spending a lot of time with each other and even sharing a blanket together. Miesha asks Ieshaan if they are getting close to each other too fast.

Pratik Sehajpal and Nishant Bhat are seen unscrewing the lock of the bathroom while another contestant Vidhi Pandya was having a shower inside. After Vidhi complains to Karan Kundrra and Vishal Kotian about it, a massive altercation took place between Pratik and junglevaasis. Pratik, however, seems to be unbothered by the allegations from housemates and in his defence says that he doesn’t care if there was someone inside the washroom. Vidhi confronts Pratik about it and he reverts saying she can put allegations on him if she wants.

Akasa tries to talk to Pratik but he snubs her saying he will talk to her later. The two have an argument over it soon after.

Karan Kundrra is seen apologising to Shamita for targeting her and said he did so in an attempt to win the map from the Bigg Boss OTT contestants. Karan had devised a plot to create a rift between Shamita, Pratik and Nishant. Incidentally, Shamita had a huge meltdown on Day 6 due to Pratik’s behaviour and was angry at Nishant for supporting him. She accused Pratik of being selfish and claimed that Nishant feared going against Pratik. She again discusses the issue with Nishant and accuses him of supporting his friend Pratik even when he does wrong. She says she can’t play the game as the three of them are not in a sync.

Karan Kundrra had played the ‘Divide and Rule’ formula a day before which led to friction between the ‘Mukhya Gharwaalon’ – Shamita, Pratik and Nishant. Kundra discusses and sorts things out with both Shamita and Nishant. Nishant is seen complaining to Pratik that Shamita did not cook for them and only made for herself. Pratik calls her ‘diplomatic’. Nishant says if given an option, he would like to first throw Shamita out of the house.

Bigg Boss announces the captaincy task in which ‘junglevaasis’ are asked to choose a captain between Shamita, Nishant and Pratik. Contestants unanimously chose Shamita as the first captain of Bigg Boss 15.