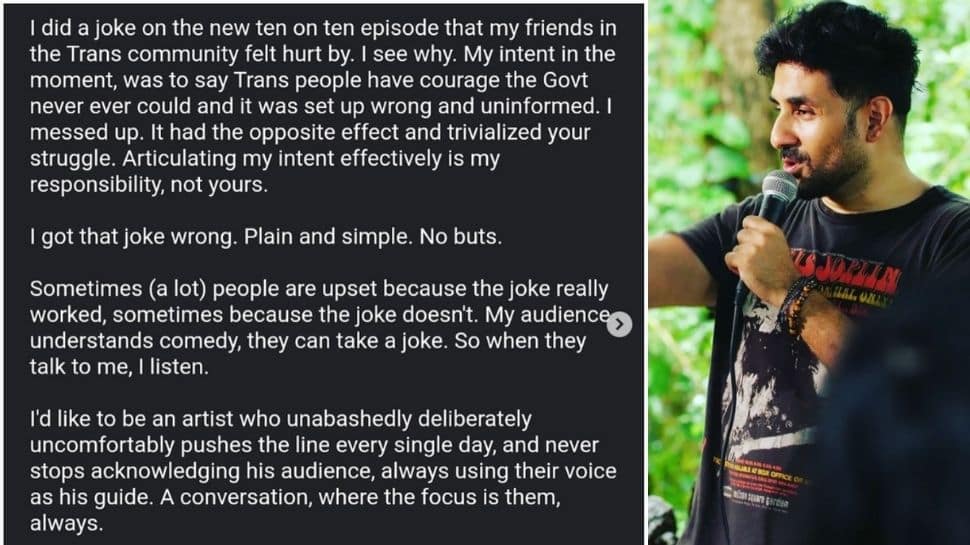 New Delhi: Comedian Vir Das has been criticised on Twitter for making a transphobic joke in his latest episode of #TenOnTen. In the video, shared on YouTube, he is heard poking fun at the trans community and gender pronouns. After the video was released many netizens took to Twitter to call him out on the joke especially since he is known as a ‘progressive’ comedian.

A fan named Amaan even privately messaged him on Instagram explaining why his joke was offensive to the Trans community. The comedian even shared a screenshot of the message he received.

Amaan wrote, “Hey Vir. I’ve been a big fan of your comedy and your work (excluding Mastizade Imao) for a long time now. I’m a queer individual who identifies as non-binary. I see your reaction to the calling out of your mistakes and I feel like someone has to call you in, instead.”

“When you feel like you’re being attacked, it’s very easy to get defensive and reactionary. You of all people know punching up is how comedy works, and yet you chose to punch down, if only as a set up,” he further wrote. 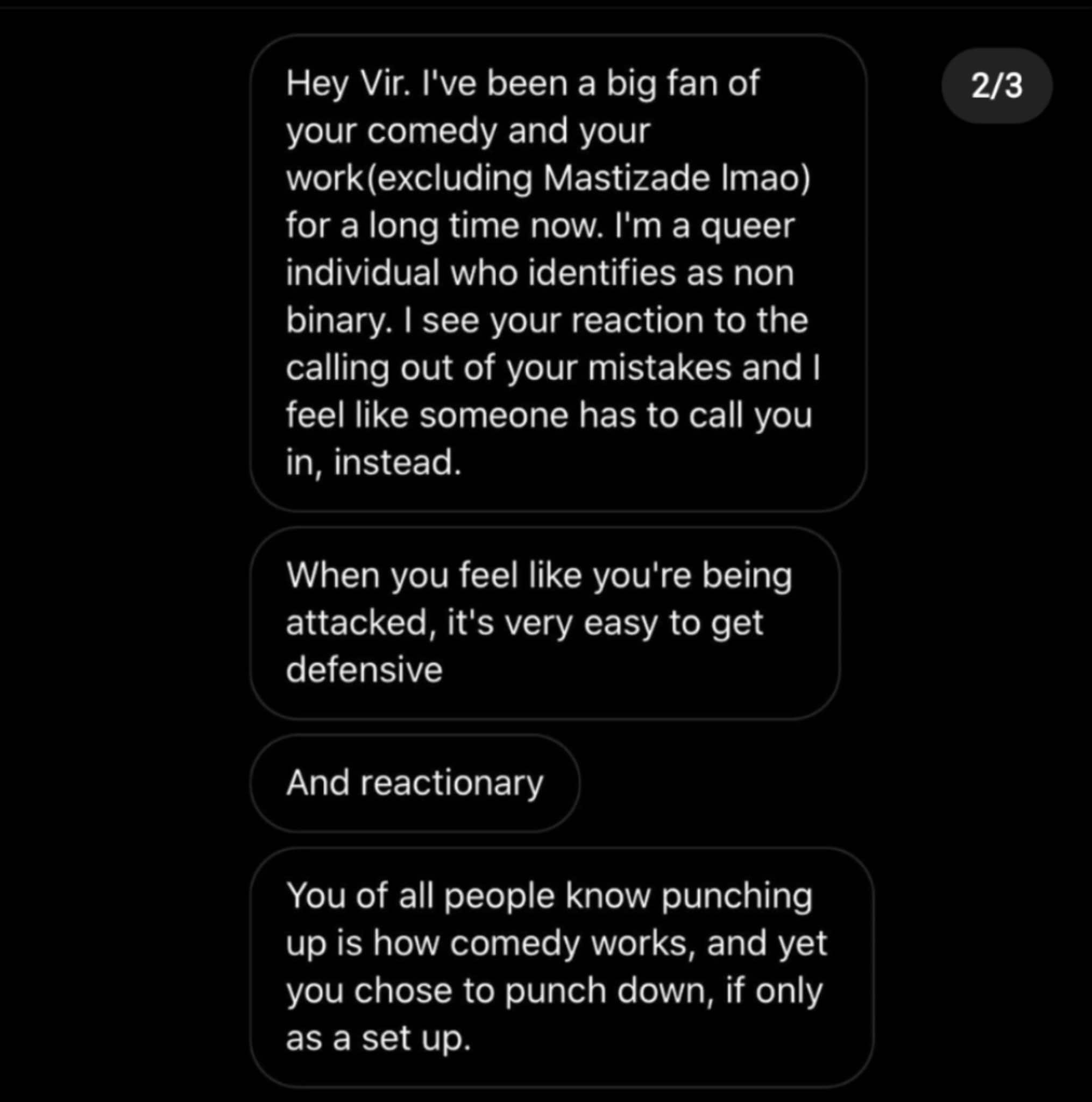 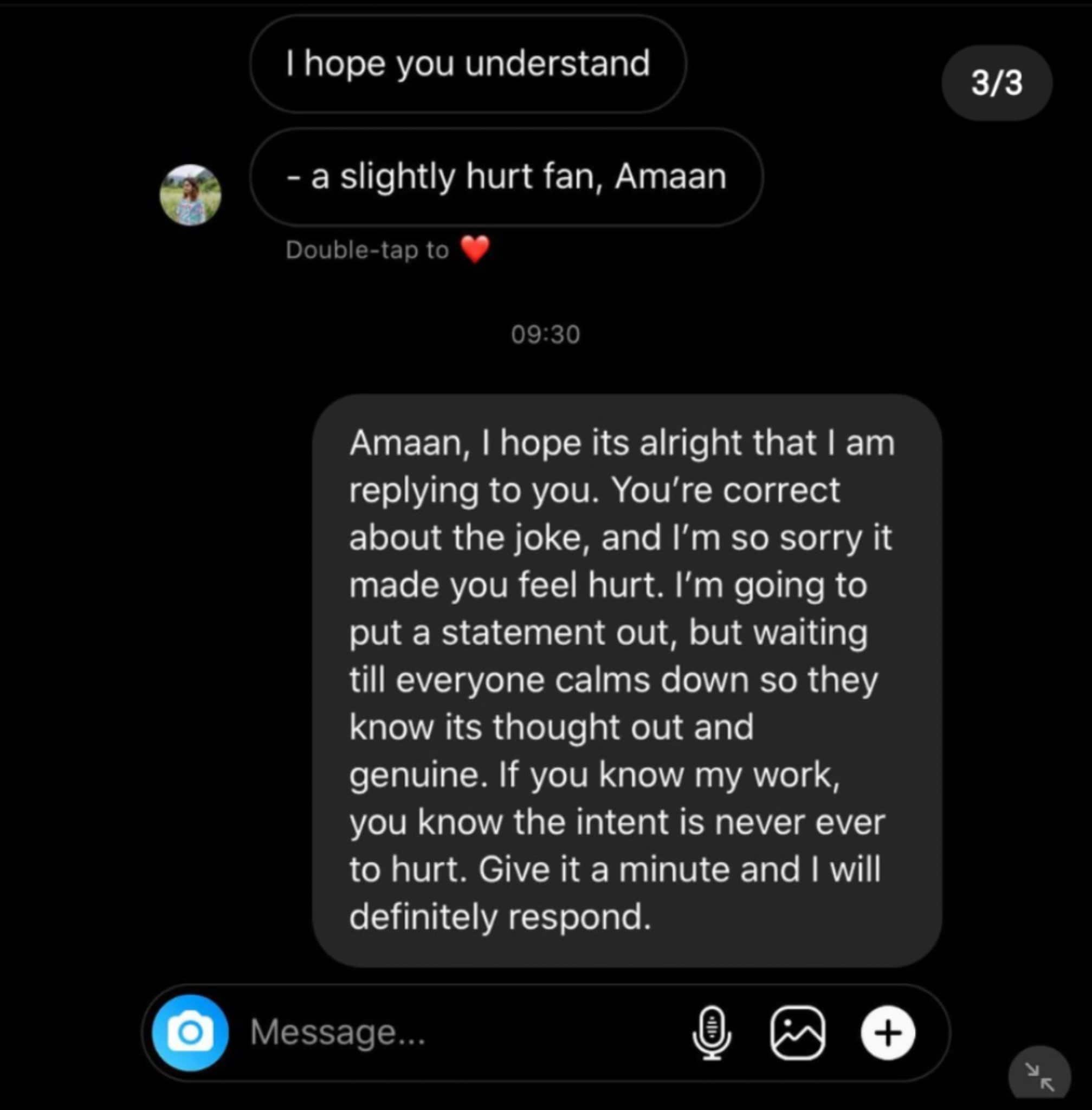 Vir replied saying, “Amaan, I hope it’s alright that I am replying to you. You’re correct about the joke, and I’m so sorry it made you feel hurt. I’m going to put a statement out, but waiting till everyone calms down so they know it’s thought out and genuine. If you know my work, you know the intent is never ever to hurt. Give it a minute and I will definitely respond.”

On Sunday (August 15), Vir had taken to Instagram to share an apology to the Trans community. He wrote, “I did a joke on the new ten on ten episode that my friends in the Trans community felt hurt by. I see why. My intent in the moment, was to say Trans people have courage the Govt never ever could and it was set up wrong and uninformed. I messed up. It had the opposite effect and trivialized your struggle. Articulating my intent effectively is my responsibility, not yours. I got that joke wrong. Plain and simple. No buts,” Vir wrote.

I’d like to be an artist who unabashedly deliberately uncomfortably pushes the line every single day, and never stops acknowledging his audience, always using their voice as his guide. A conversation, where the focus is them, always. Amaan, thank you for your message. Know that I see you, I heard you, your struggle, I’m in this conversation, I’ll always listen and you will always inform my comedy,” he further wrote.

Vir Das is one of the most popular comedians in India. He started his career as a stand-up comic and later entered the entertainment industry with films like Delhi Belly, Badmaash Company, Go Goa Gone, and Shaadi Ke Side Effects, to name a few.

The comedian-turned-actor has also been a part of various international stand-up shows, as well as made his debut in American television with the television series, Whiskey Cavalier. Back home, Vir has been part of various shows including Amazon Prime Video’s Jestination Unknown and Netflix’s Hasmukh.