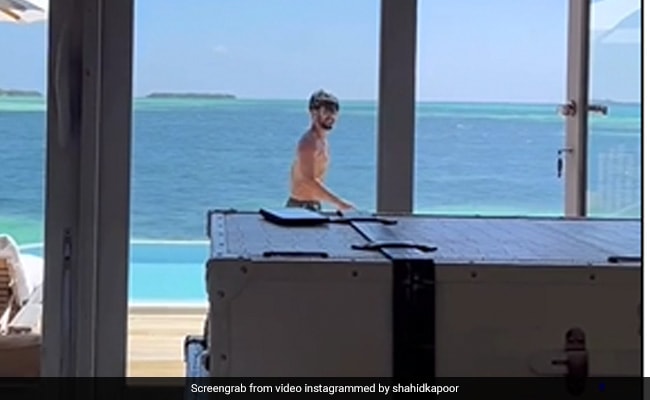 Shahid Kapoor in a still from the video. (Image courtesy: shahidkapoor)

Shahid Kapoor and Mira Rajput have been adding new pictures and videos from their Maldives vacation on Instagram since last week. The couple, who flew to the beach destination with their kids over a week ago, are making every moment count on the island. On Thursday, Shahid Kapoor posted an epic video of himself “moon walking” his way casually into another day on his vacation. The actor can be seen sporting black shorts and moon walking on the balcony on the resort he is staying in. Towards the end of the clip, he can be seen dancing hilariously. “Moon walking my way into just another day like…,” the actor wrote in the caption.

When in Maldives, get your “Vitamin sea” dose like Mira Rajput:

On Wednesday, Shahid Kapoor posted a photo with Mira Rajput and the team of the luxury resort they are staying in and wrote: “The best memories are always with the best people. Thank you soneva fushi. Your team is your biggest asset. We had a lovely time. My dear Ravi your filter coffee will be missed!”

In terms of work, Shahid Kapoor will make his digital debut in a series directed by filmmaker duo Raj Nidimoru and Krishna DK. He will next be seen in Jersey, a Hindi remake of the Telugu film of the same name. Gowtham Tinnanuri, who directed the original movie, is also helming the Hindi version. In Jersey, Shahid Kapoor will play the role of a cricket enthusiast whose dream to join the Indian cricket team is fulfilled when he is in his 40s. The film will hit cinemas on December 31 this year.