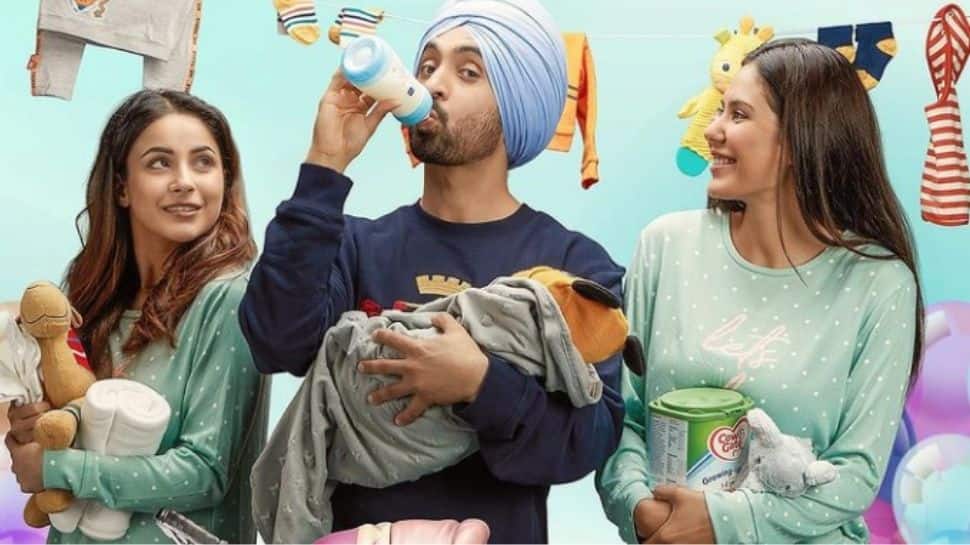 Fans were super excited to see the trio in an interesting poster! The singer also announced that the film’s trailer will release on Monday (September 27).

Furthermore, the movie will release worldwide on Dussehra – October 15, 2021.

In the vibrant poster, Diljit, Shenaaz and Sonam are seen wearing sweatpants and sweatshirts. The singer is seen drinking from a nursing bottle and holding a stuffed toy wrapped around in a blanket resembling a baby.

Shehnaaz and Sonam are twinning in light teal, polka-dotted outfits and look incredibly cute. The two are seen smiling at Diljit with a pink baby stroller placed in front of the trio.

Many netizens flooded the comment section with praises and excitement to see Shehnaaz back onscreen.

Since Shehnaaz Gill was a close companion of late actor Sidharth Shukla, there were a lot of questions on if she would resume shooting for the film after his demise.

Speaking about the same Diljit Thind, the producer of the film, had told ETimes, “We are waiting for her to recover and heal from the grave loss. We had originally planned to shoot the song on September 15 in London, but that couldn’t happen because of obvious reasons. We will finalise a new date soon and would want Shehnaaz to be a part of it, too, as she is an integral part of the film. I am in touch with her manager and hoping that she will contact us in a few days.”

‘Honsla Rakh’, directed by Amarjit Singh Saron, will mark Diljit Dosanjh’s debut as a producer. The romantic comedy film was shot in Canada and is slated for a Dussehra release on October 15, 2021.

According to reports, a major chunk of filming was concluded on April 1, 2021, barring a promotional song that was scheduled to be shot on September 15. The date of the shoot got postponed as Shehnaaz Gill was grieving the loss of her close friend Sidharth Shukla.