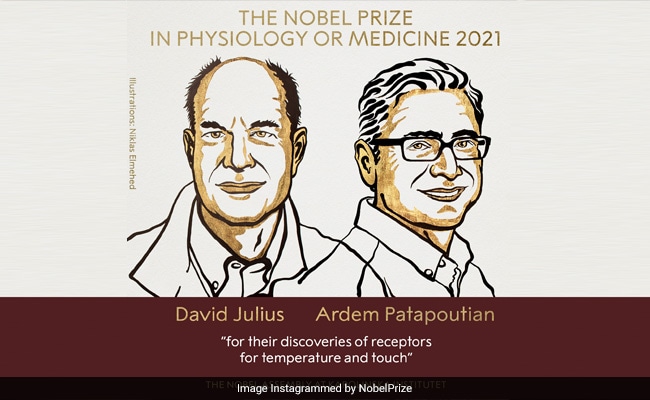 US scientists David Julius and Ardem Patapoutian on Monday won the Nobel Medicine Prize for discoveries on receptors for temperature and touch, the jury said.

“The groundbreaking discoveries… by this year’s Nobel Prize laureates have allowed us to understand how heat, cold and mechanical force can initiate the nerve impulses that allow us to perceive and adapt to the world,” the Nobel jury said.

“In our daily lives we take these sensations for granted, but how are nerve impulses initiated so that temperature and pressure can be perceived? This question has been solved by this year’s Nobel Prize laureates.”

Julius, a professor at the University of California in San Francisco and Patapoutian, a professor at Scripps Research in California, will share the Nobel Prize cheque for 10 million Swedish kronor ($1.1 million, one million euros).

Last year, the award went to three virologists for the discovery of the Hepatitis C virus.

While the 2020 award was handed out as the pandemic raged, this is the first time the entire selection process has taken place under the shadow of Covid-19.

Nominations close each year at the end of January, and at that time last year the novel coronavirus was still largely confined to China.

The Nobel season continues on Tuesday with the award for physics and Wednesday with chemistry, followed by the much-anticipated prizes for literature on Thursday and peace on Friday before the economics prize winds things up on Monday, October 11.