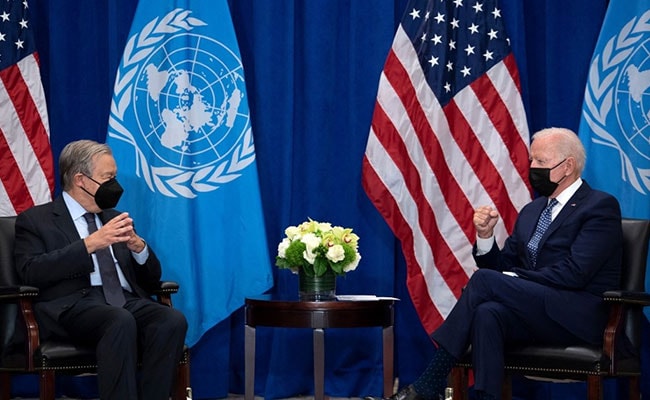 The US believes in the United Nations and its value, President Joe Biden has told UN chief Antonio Guterres, underlining that the strong bonds between America and the world body are more important than ever as current challenges like the COVID-19 and climate crisis can only be met with global solutions.

Biden will address world leaders in-person from the iconic General Assembly hall on Tuesday on day one of the week-long General Debate, describing his address to the General Assembly as “a great honour.”

“America is back. We believe in the United Nations and its value. Because of the challenges we face today in ending COVID-19 and dealing with the gravest threat to humanity we’ve ever seen, which is the whole climate crisis…we’re undergoing that can only be met with global solutions, no one country can – no 10 countries can do it,” Biden said.

“The strong partnership between the United States and the UN is based on common values and principles. And at this moment, those bonds are more important than ever,” he said before his meeting with the UN chief.

Guterres said Biden has clearly affirmed the strong commitment of the United States to the UN and to multilateralism.

“A multilateralism that we also want to see reformed, more effective, and more in line with the need to solve the dramatic problems of this world,” he said.

The previous Donald Trump administration was acutely critical of the United Nations and Washington had withdrawn from it as well as reduced funding to several key UN bodies and agreements under the Trump presidency.

The Biden administration has reversed those Trump decisions, including returning to the Paris Climate Agreement and restoring ties with the World Health Organization.

Biden said the UN Secretary-General and he share a strong commitment to the principles of human freedom and human dignity on which the UN was founded.

“I went back and reread the charter. I remember – we sometimes forget what the founding principles were – not you, but we – the world. Every UN member state likewise has an obligation to uphold those fundamental commitments and – that we’ve all made.

“The enormity of the task is already ahead for each one of us, and it’s real. But the vision of the United Nations has never been short in ambition – any more than our Constitution. But the ambition matters,” he said.

Biden thanked Guterres for his continued leadership of the United Nations through the pandemic, as well as navigating a whole raft of global crises and challenges.

“Today, governments continue to work to – must continue to work together in a system built on international law to deliver equitable prosperity, peace, and security for everyone. And this is as valuable and necessary today as it was 76 years ago,” the US president said.

Guterres, whose first term as UN Chief dealt with a Trump administration, said that the cooperation between the United States and the UN is a fundamental pillar for the work of the world organisation.

Guterres reassured Biden that he wants to deepen the cooperation between the US and UN.

“We are extremely happy with the coordination we have with the Mission, with whom we work very, very well. And you can be absolutely sure that we share the same values, the same concerns, and the same commitment to the people of this world, especially to the most vulnerable and to those that have been more than dramatically impacted both by the COVID, the climate, and other challenges that we face together,” he said.

Separately, a readout of Biden’s meeting with Guterres issued by the White House said that the two leaders “reaffirmed the strong partnership between the United States and the United Nations which, in particular, is based on common values that include respect for universal human rights, fundamental freedoms, and international law.”

They discussed the importance of multilateralism and the defence of democracy and the rules-based international order, which is anchored by the United Nations, as critical to addressing today’s greatest challenges, it said.

“Specifically, they spoke of the urgency to work together, along with Member States of the United Nations, to end the COVID-19 pandemic, prepare for future health security threats, combat climate change, strengthen food systems and food security, address humanitarian needs, prevent and mitigate conflict, and promote and defend human rights worldwide,” it said.

Biden reaffirmed that complex, global challenges can only be addressed by genuinely global solutions, an approach reflected in the President’s vision of building back better, and he emphasised the unique role of the United Nations in delivering prosperity, peace and security for everyone, the readout said.