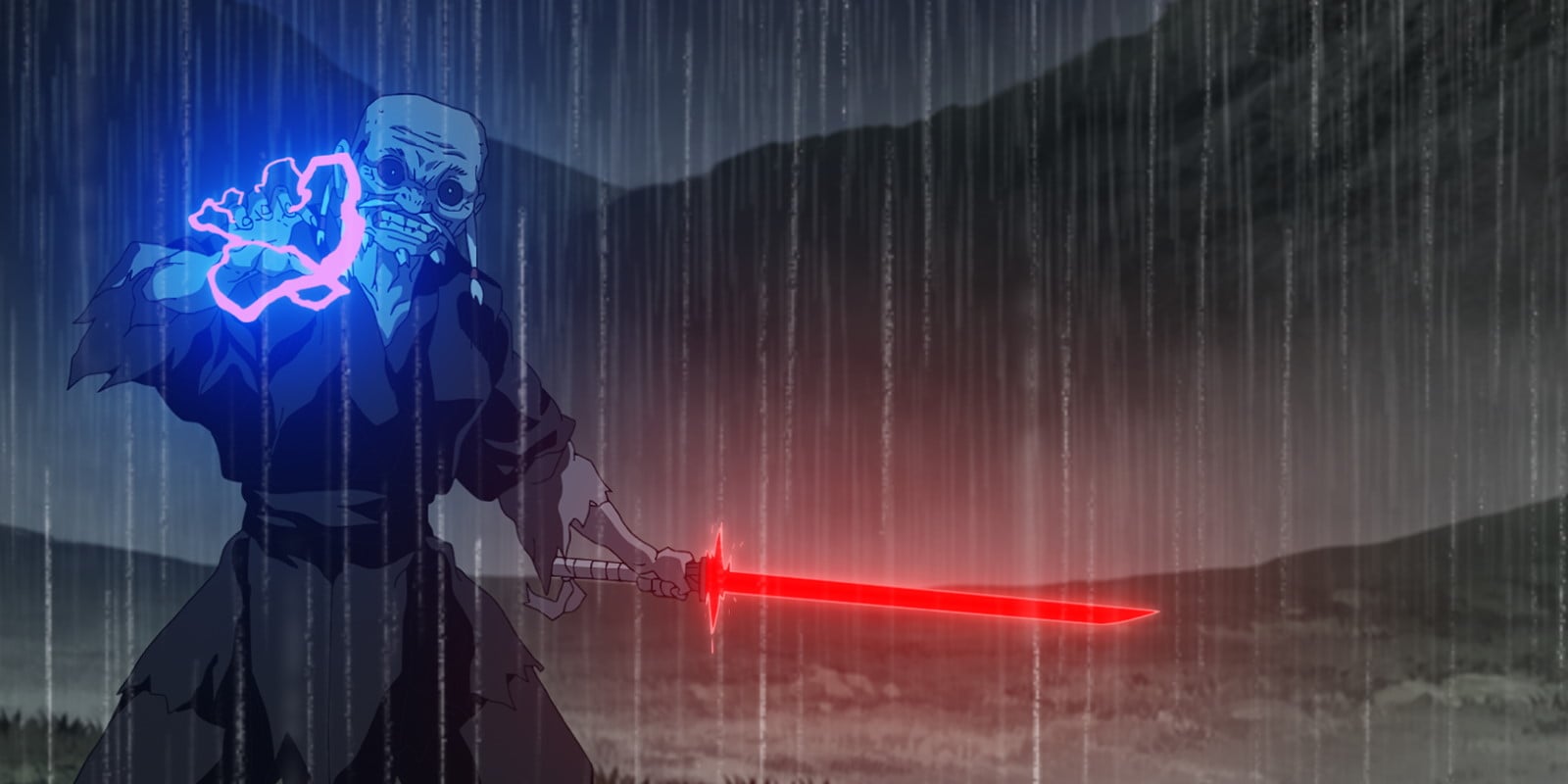 Star Wars creator George Lucas has never been shy of acknowledging his debt to the legendary Japanese filmmaker Akira Kurosawa. In the early ‘70s, as Lucas began developing the first film, he looked to Kurosawa’s 1958 Edo-era period drama The Hidden Fortress. It tells the story of a civil war through the eyes of two peasants, the lowest characters. It’s why Star Wars is told from the viewpoint of two droids, the lowest characters. The Jedi, meanwhile, are essentially Lucas’ take on ronin — masterless samurai — who were the centrepiece of many a Kurosawa movie. The lightsaber is their sword, except cooler. It’s quite poetic then that Star Wars: Visions — premiering Wednesday on Disney+ and Disney+ Hotstar — brings Lucas and his films full circle.

The new anthology anime series Star Wars: Visions hands the keys to the galaxy far, far away to seven Japanese studios. Nearly all of the nine short films — I’ve seen all — involve the Jedi and the Sith in one way or another. This inevitably results in duels, which forms the core of their third acts. The Jedi-Sith stories get repetitive, for most Star Wars: Visions shorts are just 13–18 minutes in length, leaving little room to iterate before ending in the eventual showdown. A couple — one goes full Kurosawa with black-and-white, and another is psychologically haunted — do manage to set themselves apart, though it’s more due to their background score.

The latter features tabla (an Indian connect I was not expecting and was delighted by), while the former mixes Western instruments with Japanese instruments such as hand-drum tsuzumi, temple drum nagado, Buddhist cymbal myohachi, short-necked lute biwa, and bamboo flute nohkan.

It’s refreshing and all-new to the Star Wars universe, which is exactly what Star Wars: Visions needed to be. That’s also why the lone non-Jedi tale works so well too — even as it’s the only one to bring in existing Star Wars characters — though more so for other reasons. It’s unlike anything that’s been served up before in the galaxy, as it evokes joy and is full of happiness, closer to being Ted Lasso than Star Wars emotionally.

What does set them all apart is the Japanese dialogue, which I always preferred over the English dub, as it seemed fitting in more ways than one. I couldn’t always watch it that way though, as Disney’s preview site for critics didn’t offer English subtitles for every short. But those watching on Disney+ and Disney+ Hotstar won’t have this problem.

From Kota Factory to Star Wars: Visions, What to Watch in September

The most out-there of them all is Star Wars: Visions episode 2 “Tatooine Rhapsody” (from Studio Colorido and director Taku Kimura). It follows lead singer Jay (voiced by Hiroyuki Yoshino/ Joseph Gordon-Levitt) whose band is being torn apart after Jabba the Hutt tasks Boba Fett (Akio Kaneda/ Temuera Morrison) to bring in Huttese bandmember Geezer (Kousuke Goto/ Bobby Moynihan). Described as a Star Wars rock opera, “Tatooine Rhapsody” lives up to its billing. It lends further credence to music being a universal language and its ability to win hearts galaxy-wide. It also expands the Star Wars galaxy in a way the films never could.

Star Wars: Visions episode 1 “The Duel” (from Kamikaze Douga and director Takanobu Mizuno) and episode 9 “Akakiri” (from Science Saru and director Eunyoung Choi) are the highlights of the Jedi tales. In monochromatic “The Duel”, a ronin (Masaki Terasoma/ Brian Tee) and a female Sith Dark Lord (Akeno Watanabe/ Lucy Liu) clash in a village — with their fight animated at a lowered frame rate. “The Duel” is the one with the Japanese instruments. “Akakiri” follows a Jedi (Yu Miyazaki/ Henry Golding) plagued by visions who makes a deal with the devil to save someone close to him (Lynn/ Jamie Chung). It’s eerie, haunting, and benefits from U-zhaan’s tabla score. U-zhaan has learnt from two of India’s greats, Zakir Hussain and Anindo Chatterjee, and it shows.

None of the other six Star Wars: Visions shorts are on quite the same level, though some show promise before fading. In episode 4 “A Village Bride” (from Kinema Citrus and director Hitoshi Haga), a wandering masked Jedi (Asami Seto/ Karen Fukuhara) visits a village in servitude to the Separatists that rule over them with an iron hand. There are some lessons about living in harmony with nature, but not conveyed with much depth. The masked Jedi’s powered boots are quite cool though.

On episode 5 “The Ninth Jedi” (from Production IG and writer-director Kenji Kamiyama), the daughter of a lightsaber smith (Chinatsu Akasaki/ Kimiko Glenn) must come to the aid of surviving Jedis in a dark time for the galaxy where lightsabers and the Jedi Order have been long lost. But “The Ninth Jedi” feels rushed, and it wastes Shang-Chi star Simu Liu in a small role.

Star Wars: Visions episode 3 “The Twins” (made by Trigger and director Hiroyuki Imaishi) attempts to put a spin on the Skywalker origin story: what if a pair of Force-sensitive twins were delivered to the Dark side? Like Luke and Leia, they have versions of R2D2 (R-DUO) and C-3PO (B-2ON) as well, with one supporting the brother Karre (Junya Enoki/ Neil Patrick Harris) and sister Am (Ryoko Shiraishi/ Alison Brie), respectively. And unlike the Skywalkers, they have their own Death Star: two Star Destroyers joined with a mega cannon in the middle. “The Twins” features some lightsaber action shots that wouldn’t work in live action. It also feels inspired by Star Wars: The Last Jedi in two key moments and how R-DUO riffs on BB-8, though it does have its own flair in Am’s spider-y tentacle-like lightsaber weapon.

The remaining two Star Wars: Visions films are minor efforts in my opinion. In episode 7 “The Elder” (made by Trigger and writer-director Masahiko Otsuka), a Jedi (Takaya Hashi/ David Harbour) and his Padawan (Yuichi Nakamura/ Jordan Fisher) land on a remote planet in the Outer Rim after feeling a strong disturbance in the Force. Though it sets up the Padawan as reckless and craving action, it doesn’t deliver on that despite being an inch away from that lesson. “The Elder” ends up being just a couple of lightsaber duels and nothing more.

That leaves episode 6, “T0-B1”, (from Science Saru and director Abel Gongora) about a cybernetic boy (Masako Nozawa/ Jaden Waldman) who dreams of being a Jedi. T0-B1 unearths a secret his armless master Mitaka (Tsutomu Isobe/ Kyle Chandler) is hiding — and then must prove himself in battle. The duel has a couple of flashes of something different — thanks to the boy being cybernetic — but other than that, it’s too plain and straightforward. “T0-B1” also tries to touch upon the ultimate role of a Jedi, but it’s unable to scratch below the surface.

But I’m happy that Lucasfilm came up with Visions, because it is making me crave a full anime series, or an anime feature film. And maybe that’s the bigger plan. Get several studios to make a short film as an audition, to see what they bring to the floor and if any are capable of delivering a full-fledged Star Wars anime. I hope this leads to something and doesn’t end up as an experiment.

After all, what better way for Star Wars to expand its horizons than to return to its roots — and trust the next generation of filmmakers from whence it came? It’s the circle of life.

Star Wars: Visions is out Wednesday, September 22 on Disney+ and Disney+ Hotstar.