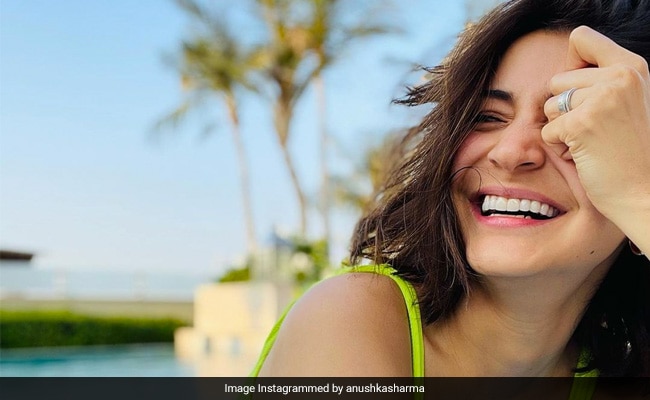 Make way for water baby Anushka Sharma. The actress lit up Instagram on Tuesday by sharing stunning pictures of herself chilling in a pool. Anushka looks stunning in a neon swimsuit in the photos, which feature her smiling with all her heart. Sharing the photos, Anushka Sharma wrote nothing in the caption and accompanied her pictures with a green leaf icon. With twenty minutes, her post garnered over five lakh likes. Several fans dropped red hearts in the comments section for Anushka Sharma. See her photos here:

Anushka Sharma returned to Mumbai from Dubai with her husband, cricketer Virat Kohli, and their little daughter Vamika.

Recently, in an interview with a magazine, the actress opened up about her views on body positivity and how she is “much more comfortable” in her skin than she was ever before. Anushka, who was talking about undergoing major physical changes during and after pregnancy, told Grazia: “I’ve realised that it’s a state of mind, it has nothing to do with how you look. My body’s not as it used to be; it’s not as toned as it was. And I’m working towards it because I like to be fit. Having said that, I am so much more comfortable in my skin today than I was before, even when I had that perfect body.”

In terms of work, Anushka Sharma has worked in films like Rab Ne Bana Di Jodi, PK, Band Baaja Baaraat, Sultan and Ae Dil Hai Mushki. She was last seen in the 2018 film Zero. Her last project as a producer was the Netflix film Bulbbul and it was a massive success. She also produced Amazon Prime Video’s smash hit web-series Paatal Lok last year. Her next production Qala, a Netflix original movie, will mark Irrfan Khan’s son Babil’s acting debut. Earlier this year, the actress also announced her new project as a producer – a Netflix original series titled Mai.